Posted: February 21, 2018 Under: General Article By ashlee No Comments 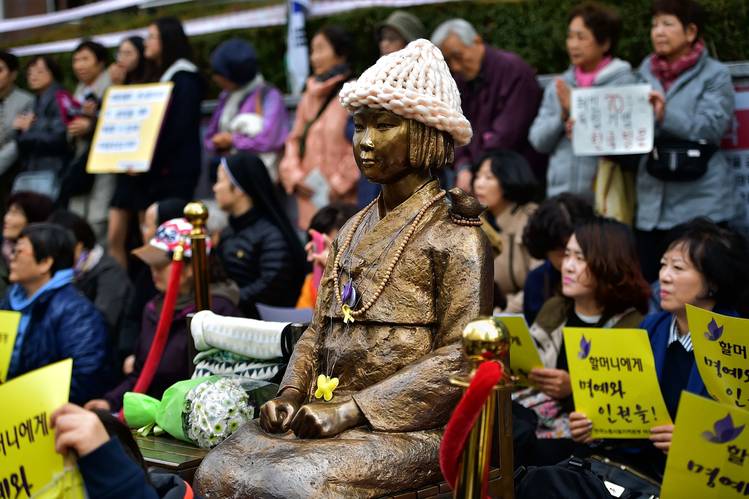 World War II might seem like a distant memory to many of those still living that are old enough to have lived through that difficult time, but for 46 “comfort women”, the memories of their experiences are still fresh. During WWII, more than 200,000 women, many of whom were Korean, were forced to work in brothels and were used by Japanese soldiers during wartime. In the years since the end of the war, Japan and South Korea came to an agreement on how to reconcile the ordeal these women went through.

The agreement, penned in 2015, included provisions that stated that Japan would provide $1 billion yen that would go toward care for the now-elderly women. There was also to be an apology issued by Japan’s Prime Minister, taking full responsibility. South Korea would remove a statue memorializing the “comfort women” that had been erected outside the Japanese embassy in Soeul, and South Korea would consider the matter settled if these terms were met. This past December, South Korea’s new foreign minister and Japan’s foreign minister met to discuss this issue.

Although Japan and South Korea remain united on the looming threat of North Korea’s push for nuclear dominance over the region, they remain divided on the issue of the comfort women testimonies and other issues related to the Japanese occupation of the Korean peninsula from 1910 to 1945. The issue is back on the table, considering Park Guen-hye, the current South Korean foreign minister’s predecessor, was impeached.

Thus far, Japan’s Prime Minister Abe has adhered to Japan’s side of the bargain and has expressed regret and taken responsibility for the plight of the South Korean comfort women . The ties between these two nations have historically been strained, but this deal was a great step forward in mending those relationships and at the time of it’s ratification, it was seen as a move in the direction toward future for both nations. With growing tension in the region and changes in leadership, South Korea is looking to see if it can strengthen its bargaining position on behalf of the 46 survivors.

One of the largest points of contention between the new South Korean foreign minister and the current deal is the proposed removal of the statues in front of the Japanese embassy. In spite of apologies from Japan, the atrocities these women endured does not simply disappear, and South Korea believes that it should still be acknowledged. Japan, however, wants to stick to the original agreement, which states that the matter will not be used as a negotiating tool between the two nations moving forward.

Both nations wish to move forward with their relationship in the face of rising tensions in the region and benefit from finding common ground. As the 2018 Winter Olympics seek to unite countries all over the world, the Prime Ministers of both nations will also unite to cover this, along with other major issues affecting the lives of their people. While the issue of the comfort women will be on the table, it will be along side nuclear talks that will have a major impact on the global community.